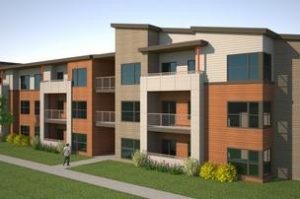 COURTESY IMAGE/KREHBIEL ARCHITECTURE
A 372-unit apartment complex in northwest Wichita, called Avante, broke ground earlier this year. Its clubhouse and first two apartment buildings are set to be completed and ready for residents in spring 2023. The entire project is planned to be wrapped by spring 2024.

Construction on Vantage Point Properties’ Class A apartment complex, named Avante, began in March at the northwest corner of 37th and Ridge Road, and its first two buildings and clubhouse are planned for completion — and will be ready for residents — in spring 2023.

From there, additional buildings will be completed. And by spring of 2024, when the project is set to wrap, there will be 18 buildings and 372 units on site.

“We love the timing of this project,” he said. 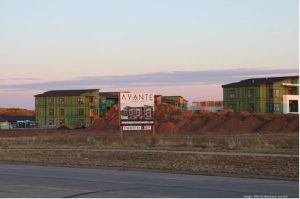 Construction on the Avante luxury apartment complex at the northwest corner of Ridge and 37th St. in northwest Wichita is progressing.

An October weekday morning drive through the growing area of the city showed a flurry of activity at the 18-acre site.

The Law Company is the general contractor and Krehbiel Architecture is the architect on the effort. According to WBJ data, the estimated project cost is $50 million.

Jackson said he is excited about more than just the timing of delivering one, two, and three-bedroom units to a market that has seen a boom in luxury apartments in recent years — but still has the need for them.

Being located in the Maize school district, the nearby highway access to K-96 and having a lake to right next to the complex (to the west) are all draws to Avante, he said.

“This property, in my opinion, scores very highly across the board,” said Jackson, whose company’s Class A apartment work has included the development of SunStone Apartment Homes at Fox Ridge — not far away from Avante — near 37th and Maize Road.

Jackson said there has not been big changes in the amenities’ plans for Avante over the course of the year.

The complex will feature pickleball courts, a saltwater pool, hot tub, a basketball court and fire pits, among other amenities.

One addition will be electric vehicle charging stations on site to fill an increased need in the market, Jackson said.

This rendering shows several of Avante’s planned amenities, including pickleball courts and a saltwater pool.

In addition to amenities, Jackson said Avante should be able to stand out compared to other Class A complexes with unique design elements.

“We’re trying to be a little bit edgier without being too crazy,” he said.

For those wanting to learn more about living at Avante, Jackson said Vantage Point is currently populating a wait list. On the development’s website, individuals can sign up for the “Avante VIP list,” where they can note specifics (preferred price range, desired number of bedrooms and more) surrounding their interest.

As for the cost of living at Avante, Jackson said prices have not been finalized yet, but that those interested shouldn’t expect anything out of the ordinary compared to other luxury apartments in the city.

“It’s going to be a market rate for a Class A product,” he said. 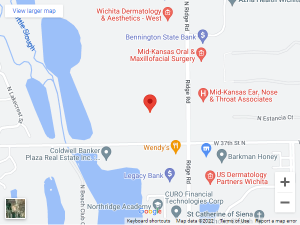 Stan Longhofer, director of Wichita State University’s Center for Real Estate, said in August that — even with many multifamily projects in the works throughout the metro area, including Main Street Living’s plans to convert the old Commerce Bank building into up to 152 luxury apartments and a co-working space — developers and lenders have been careful to avoid overbuilding in recent years.

“We’re building at a fairly measured pace,” he said at the time.