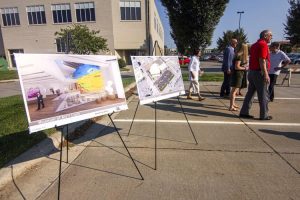 Renderings of the Museum of Art and Light’s second floor gallery and an aerial view of the museum are displayed Friday, September 9, 2022, as people arrive prior to the groundbreaking of the museum at Third and Pierre streets.

Local and state officials gathered Friday morning for the groundbreaking ceremony of the Museum of Art and Light.

“It’s a great day today for Manhattan, for the arts, for the region and for the whole state of Kansas,” said Tracey DeBruyn, who is developing the museum along with her husband, Bob DeBruyn.

The museum at Pierre and Third streets will be a three-story, 50,000-square-foot building that will display a mix of traditional and digital art. The digital portion of the museum will project images of art, so people can see touch and set foot in the art, with inspiration drawn from the immersive exhibits at Paris’ l’Atelier des Lumieres museum.

The DeBruyns said in May that they expect the museum to open by spring 2024.

Tracey said the family had talked about building a museum for years. She thanked Ron Bowman and Stan Zukowfsky, both of Scottsdale, Arizona, for helping get the project off the ground. She said Bowman and Zukowsky came to them and donated their entire art collection and said, “Let’s get going.”

The DeBruyns will use sales tax revenue from the city’s STAR bond district to generate $23 million for the project. The DeBruyns secured $21 million in private donations for the museum. Bob DeBruyn speaks at a groundbreaking Friday, Sept. 9, 2022, for the Museum of Art and Light at Third and Pierre streets. “We can now give parents the advice to get your kids and grandkids into visual and performing arts as fast as you possibly can,” DeBruyn said.

Bob said research has shown beyond a shadow of a doubt that the arts are directly related to success, happiness and quality of life.

“This is the major reason that we’re building this museum,” he said. “We can now give parents the advice to get your kids and grandkids into visual and performing arts as fast as you possibly can.”

Bob said to their knowledge, the Museum of Art and Light will become the first in the world that has both a traditional museum and a digital and immersive museum. Jason Smith, president and chief executive officer of the Manhattan Area Chamber of Commerce, leads applause Friday, Sept. 9, 2022, during a groundbreaking for the Museum of Art and Light at Third and Pierre streets. “…In my 30 years in this business, I’ve not seen two people more committed and persistent to seeing a project in a community for the betterment of the community,” Smith said in praise of Bob and Tracey DeBruyn.

Lt. Gov. David Toland said the Museum of Art and Light will be a transformative institution not just for Manhattan and the Flint Hills area but for the state.

“The combination of having 21st-century technology, with the classics, with Renaissance-era paintings and beyond, is going to be something that is truly different and that is going to knock people’s socks off,” Toland said. “It’s going to bring a lot of money, put a lot of heads in beds here in Manhattan, and I think change the image of not only this region but our state as a whole.”

Toland went on to say the museum is going to connect Kansans of all ages to art and culture.

Jason Smith, president and CEO of the Manhattan Area Chamber of Commerce, said he had seen a lot of very good proposals over the years, but very few of them actually end up happening.

Smith said when he first heard about the museum, he thought it would be wonderful but didn’t think it would happen because ideas like the Museum of Art and Light don’t happen in middle America. He credited the DeBruyns.

“I want to tell you this, in my 30 years in this business, I’ve not seen two people more committed and persistent to seeing a project in a community for the betterment of the community,” he said.

By: Christian Bright
The Manhattan Mercury