Back to All Articles
The Law Company 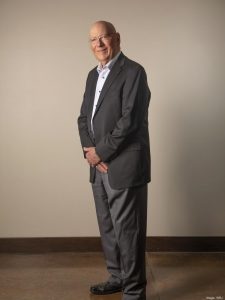 What do you feel is your greatest accomplishment? Looking back over the past 57 years, being involved in the many projects we’ve completed in Wichita and the state of Kansas in addition to projects in over 40 states, there are many things that I’m very thankful for. But the one that stands out occurred in the mid-1980s. We brought in a big-name consultant for a strategic planning meeting and made the decision to grow and with that commitment, hired all the people needed to accomplish our goal of revenues of $100 million. Prior to that time, nearly all of our work was retail. For us to realize this growth, we had to pursue other types of work and we did – everything from treatment plants, large apartment projects, to large athletic arenas – work we’d not done before. Looking back, the result was predictable. We quickly met the $100 million goal, but the cost was really, really painful – lost a lot of money. Within a couple years, things became difficult and then all of the new people we hired left. Fortunately, though, every one of our long-time employees stayed. There were some scary times for a few years, but we weathered the storm thanks to a surety company that believed in us, wonderful co-workers who believed in what we were doing, and a lot of prayers. It was a humbling and painful experience, but we are the company we are today and I am the person I am today as a result of those experiences, and they have guided all the big decisions I’ve made the past 35 years. In addition, I’ve been blessed to work with good, loyal and very talented people throughout my career at The Law Company.

What advice do you have for younger professionals who want to have successful careers like yours? Live by the Golden Rule – treat others the way you’d like to be treated. Work hard. I’m a big believer in the Stewardship way of life and feel that it is always important to remember that whatever we have been given in life or what we’ve accomplished, we can’t take it with us when we die. The good Lord has asked us to be good stewards of everything he’s blessed us with and all that we have accomplished. Enjoy what you do. Give back to your industry and community. You’ll make many decisions in your career, and when you make those decisions, and especially the difficult ones, ask yourself, “Is this the right thing to do?” If your answer is “yes,” I assure you, you’ll sleep better every night. If you’re able to do all of this, you will enjoy what you do and your work will be so rewarding.

What part of your career has given you the greatest satisfaction? As I mentioned earlier, we went through some very challenging times starting about 40 years ago. About that same time, I was able to convince the company that we should take the assets of our existing pension plan and roll them over into an ESOP. During those difficult times our long-time, loyal employees had seen their retirement assets reduce to a fraction of what it was when the ESOP was established, but they believed in the company and the ESOP and committed to stay. Thankfully, they were paid back in spades. It has been a wonderful success story for us. It has not been uncommon for our employees to work their full careers at The Law Company. Many of them retiring after 35, 40 or 45 years of service — and doing it very comfortably. For me, it doesn’t get any more rewarding than that. My wife Hannah and I love the construction business. We consider all people I work with at The Law Company to be part of our family.

Who are the people who have been most influential in your career? There have been countless people who have helped me the past 57 years; however, there are probably three that stand out. The first person was Milt Pollitt, who hired me in April 1965. Milt was Ed Law’s partner in Law-Pollitt Construction Co. The company was founded in June 1959 and was starting to really grow when I joined the company. Milt had just started a training program when he hired me. In that first year, as part of the training program, I worked on four unique projects the company was constructing at that time – serving in different roles for each of these projects: Normandie Shopping Center, Highland House Apartments, Twin Lakes Shopping Center, and the Science Building at Sacred Heart College (now Newman University), and then traveled to Fremont, Neb., for the first project the company had constructed out of the state of Kansas and the first project that we did for Melvin Simon & Associates (now Simon Property Group). We have worked nearly continuously for that wonderful company since that project. Milt left the company in 1967, but he remained not only a mentor, but one of my closest friends until he passed away in 2006. The company changed its name in late 1969 to The Law Company. I worked directly for Ed Law after Milt’s leaving. He and Milt were as different as night and day. Ed challenged all of us who worked for him and gave us a lot of responsibility. I’ve known for a long time that the opportunities he gave me I would have never received in any other construction company. The other person who provided me much guidance and support, especially during the times before I became president in 1978 and for a number of years after, was Carl Bell. Carl and his wife, Gwen, were wonderful friends to Hannah and me and we treasure those memories to this day. For all three of these uniquely special men in my life, I am forever grateful.