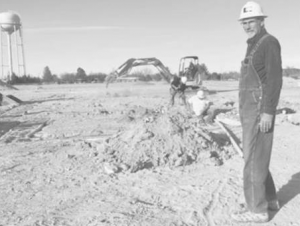 The warm dry weather in La Junta has been good for the construction team from The Law Company laying the plumbing and footings for Blue Stem Village during the past weeks.

“This [warm dry weather] is making my life good,” said Blue Stem construction manager Charley Schneiter on Tuesday afternoon. “We are ahead of schedule.” On Wednesday, he thought a little moisture wouldn’t hurt, but not enough to make the construction site a sea of mud.

On Tuesday, the concrete footings went in for Buildings 1 and 2 and the administration building. All Rite Concrete from North La Junta was a subcontractor on the concrete. On Wednesday, the plumbing was going in for the pipes and sewers. The trenches are about six feet deep and the pipes will be encased in concrete, so it is very important to get everything right. “That’s my job,” said Schneiter. Charlie Taylor plumbing from Lamar is doing the plumbing (water and sewer pipes).

Other local contractors will be doing other parts of the construction project. Martin Steel and Pipe will be working with the framing, after the first of the year. Local subcontractors will also be used on miscellaneous work and framing crews later on.

“When they start seeing the walls go up, people will say ‘well, they’re finally getting stuff done out there,’” said Schneiter.

However, the groundwork of putting in utilities that is going on right now is a major part of the work and must be done first.

Asked about the shale under the ground on the building site, Schneiter said, “We have lucked out, for the most part. Most of it is thin layers.

Asked about the thick layers, he said it had to be broken out and that was more trouble. However, things are working smoothly altogether.

Schneiter has been in the construction business for 47 years, the last five almost entirely working on assisted living facilities.

“I do mostly commercial stuff,” he said.

Born in Roswell in 1959 to Air Force parents, he moved around a lot as a child, both in the US and foreign countries. That’s a good background for a construction man.