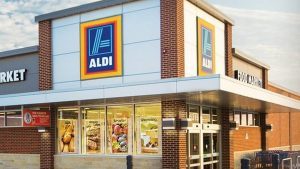 The Aldi on South Seneca, similar to the store in this photo, has closed for remodeling and will reopen in late April. It’s the chain’s final remodel in the Wichita area.

A Wichita Eagle reader who shops at the Aldi at 2826 S. Seneca is wondering if the store is permanently closed because it’s currently closed, and he said there are no signs on the building to explain why.

An Aldi representative said while stores sometimes remain open during remodeling, they often have to close in the final stages of construction.

When the store reopens in late April — there’s a soft opening April 26 and a grand opening May 13 — it will feature a new design and layout and expanded food areas.

With this final store remodel, this means all Aldi stores in the Wichita area have either opened in the past five years or been remodeled.

The Wichita Eagle
By Carrie Rengers