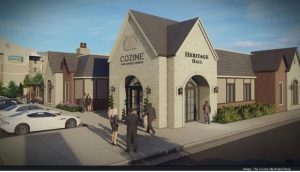 The Cozine Memorial Group
The Cozine Life Events Center will serve dual purposes of a funeral home and an event venue.

A unique vision 25 years in the making is scheduled to break ground next week in northeast Wichita.

Cozine Memorial Group, which owns 82-year-old Broadway Mortuary, is set to begin construction on the Cozine Life Events Center, a $3 million funeral home that will double as a event venue on the company’s Kensington Gardens property at 11500 E. 21st.

Company president Ashley Cozine got the vision for the dual-purpose center from years on the board of the National Funeral Directors Association. He’d travel around the country and gather ideas, ultimately realizing about two years ago what would be best for the 55-acre property. 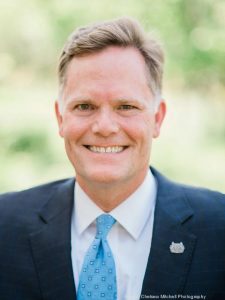 “I was meeting a lot of people doing a lot of forward-thinking things in our profession,” Cozine said. “There are other event centers, but they’re more of a funeral home and a parking lot. This will be pretty unique.”

“I know for a fact that people are not going to walk in and go, ‘This is a funeral home,'” he said.

It was Cozine’s vision 2 1/2 decades ago that led to next week’s groundbreaking.

In 1995, five years after fire did extensive damage to Broadway Mortuary’s 1127 S. Broadway location, Cozine and his father Bill, recently retired from the company, were scouting land options around northeast Wichita when they spotted an area off 21st Street. Trees prevented a good look, so they got on newly finished K-96.

“We saw a lake and I said, ‘Dad, this is the property we need to have,” Ashley Cozine said.

But there was no development around K-96 or on Greenwich. The Cozines developed 75-acre Kensington Gardens into a cemetery with a small administrative building. The first burial service was in late 1998.

Then they waited for development to arrive.

“There were times I wondered if we bought too far out in the country,” Cozine said.

Finally, Regency Lakes Shopping Center began development in 2003 at 21st and Greenwich, and development hasn’t stopped. The Cozines sold 20 acres on the northern edge to Academy Sports about seven years ago.

“There are architects that build funeral homes and that’s their specialty,” Cozine said. “It was really important to me to work with a local architectural group, and working with architects who work in hospitality.”

The Law Company, LK Architecture’s parent company, is the contractor on the project. President Dennis Kerschen said the unique features came out in Cozine’s ideas.

“From Ashley’s standpoint and ours, it’s been a transformational type of project to be involved in,” Kerschen said, “to take Ashley’s vision of what he wants to be from his current business model to transform into more of a dual purpose.”

In addition to normal features of a funeral home, the Life Events Center will have a living-room area, a library with historical features from the city, a kitchen, patio area, and large event room that can seat more than 100 people at tables.

The center, which will be built on the westernmost part of Kensington Gardens, will feature a large parking lot and back up against two hotels. Construction is expected to be complete in nine months.

“There’s no precedence for what we’re trying to do,” Cozine said. “So it will be interesting to market it, but I think what’s going to happen is if a business group comes in to have a breakfast, they’re going to think this is a really cool place.”