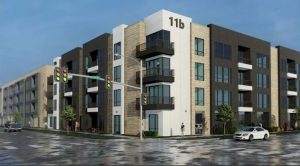 A rendering shows the proposed 11B apartments at the corner of 11th Street and Bluemont Avenue. The building would be connected to the 12B Lofts on the same block.

The city has cleared the way for a new 33-unit apartment complex next to the 12B Lofts.

The Manhattan City Commission unanimously approved Tuesday the rezoning of land at the intersection of 11th Street and Bluemont Avenue.

The proposed four-story complex would fit in line with the city’s plans for the Aggieville Business District, especially in creating a “gateway” of tall buildings bordering the Bluemont Avenue entrance into the district, said city planner Ben Chmiel.

The plan calls for 33 apartment units, 67 bedrooms and 52 tenant parking spaces underneath the apartments.

Together with its sister unit 12B Apartments on the block’s other corner, the buildings would provide 70 total units, 172 bedrooms and 129 tenant parking spaces in the area. A connector would be built to provide access to both buildings.

The new apartment will require the demolition of 1100 Bluemont Ave. and 809 N. 11th St., which are single-family homes, and 1106 Bluemont Ave., which is a 12-unit apartment building.

City administrators said the apartment building is occupied, and the two homes are unoccupied because of “deferred maintenance issues.”

City commissioner Linda Morse expressed concern over the alley behind the apartment complex and whether the developer would pay to repave it. City officials said the alley is in poor condition, but developers have not been required to repave. Morse said she would like to see the city move toward creating such a policy. However, tenants at the new complex would not drive through the alley to enter or exit the complex’s parking lot, as the city will require the developer to build a knee-high wall between the parking lot and the alley.

During public comment, developer TJ Vilkanskas — representing project developers Back 9 Development, 12B Apartments, and 12th and Bluemont LLC — urged the commission to reconsider its requirements for water detention and parking in the future.

“The city policy states that when you get over a half acre, you have to add water detention,” Vilkanskas said. “In this situation, we’re 0.02 acres over that, and it will cost me an extra $50,000 to $75,000 to put in that system. When we start adding those types of costs to the construction, it increases what we have to charge to get money back out of the project.

“It’s not something to address now, but I would ask that we look at it in the future,” Vilkanskas continued. “To the best of my knowledge in visiting with a few engineers, there’s not a lot of data out there that shows that it is providing a great service detaining the water.”

The commission also unanimously approved an ordinance annexing 10.84 acres of Blueville Nursery and rezoning 27.4 acres for future commercial use. The ordinance came back to the commission after an error in its required notice back in February forced the city to undergo a new public notice and hearing.