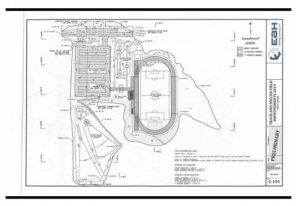 Engineers have released a map of plans for a new track and field east of current Green Sports Complex in Pratt. Plans for the Track and Soccer Field addition to the Green Sports Complex are moving from the planning stages toward construction with a groundbreaking date of March to April in sight, according to Pratt Recreation Director Bruce Pinkall and Pratt Community College President Dr. Michael Calvert.

“There’s no firm date set yet, but we anticipate we’ll turn dirt by the end of April at the latest,” Dr. Calvert said.

Completion date is anticipated for late fall, October to November.

Pinkall and Dr. Calvert, along with other city and college staff, have been working together to keep the ball rolling for the $3.5 million addition which will also be made available to area students and for public use by arrangement.

The City of Pratt is involved through the issuance of $2.8 million in Industrial Revenue Bonds which were offered for sale last month and sold out in less than a week, Dr. Calvert said. The city also provided the land for the addition which will be on the east end of Green Sports Complex.

The Law Company of Wichita as the general contractor will handle the bidding process and oversight of construction. The firm is headed by PCC Outstanding Alumnus for 1984 Richard Kerschen and son Dennis.  “Dennis will be ramrodding the construction phase,” Pinkall said.

Last month Pinkall, along with Pratt City Commissioner Zach Deeds and others, traveled to K-State in Manhattan to meet with soccer and track coaches and tour the new K-State project for which The Law Company was the general contractor.

Nathan Leeper was one of the Pratt group invited to attend, Pinkall said, because Leeper competed in track at K-State and also competed as a high jumper in the 2000 Olympic Games held in Sydney, Australia.

“The K-State group was very enthusiastic about The Law Company and highly recommended them,” Pinkall said.

“We also got some good advice about positioning the pole vault pit area and design tips for the long jump and high jump areas,” Pinkall said. “The field won’t be at Olympic level, but we’ll be able to host events at the junior college and Jay Hawk Conference levels.“

Dr. Calvert said he approached the Pratt City Commission last fall to request the city to issue the IRBs on PCC’s behalf.  “We had received two Department of the Interior grants totaling $600,000, but the grants were on the verge of expiring unless PCC had the matching funds to proceed,” Dr. Calvert said.

City Commissioners asked City Attorney Regina Probst to research the legalities and, with no legal obstacles, voted to issue the bonds, City Manager Rick Eckert said. “Really, it’s a win-win for Pratt all around,” Eckert said. “The track and soccer field will not only enhance the sports complex, but will also make a big impact on the city’s economy through events hosted there.”

“The City has been a great partner,” Dr. Calvert said, adding that PCC is currently actively engaged in fundraising to assure the $1.3 million in funds are available to pay off the IRBs when they come due in five years.  Barry Fisher, executive director of institutional advancement and alumni relations, is heading the fund drive. He may be contacted for more information at 450-2179 or by email barryf@prattcc.edu.

By Fran Brownell
The Pratt Tribune