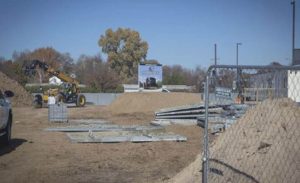 The Wichita businessman will hold a groundbreaking ceremony March 25 for the planned 5,000-seat arena at 77th Street North and Interstate 135. The ceremony will be held at 2 p.m. at the arena site.

Work has started on the new Mid American Credit Union branch at Kellogg and Oliver with the facility expected to be done by late summer.

That’s according to Mid American CEO Brad Herzet, who said the new branch will replace the Mid American’s outdated location at 804 S. Oliver.

The spot that will house the new branch is in an area quite familiar to the Mid American brass, which looked seriously at a neighboring piece of land more than a decade ago.

“We looked hard at the land where the Kwik Shop sits now at Kellogg and Oliver,” Herzet says. “That was about 15 years ago. Instead, we went with a location at 29th and Webb.”

Herzet says the access and visibility of the Kellogg and Oliver spot — the branch will be on the southwest corner, directly across Oliver from the Kwik Shop — were attractive.

The Law Co. Inc. is the general contractor for the project. Richard Kraybill is the architect. Earlier this month, The Law Co. pulled a $2.1 million building permit for what will be a single-story building with a basement and drive-thru.

“We’ll move the staff from our existing branch (at 804 S. Oliver) and we might add a couple of staff members,” Herzet says. “We’ll also have signage that will be visible from Kellogg. The basement is dug out now and we hope to be in by Labor Day.”

Mid American has 110 employees and operates five Wichita branches and five others across the state. The organization is the fifth-largest credit union in the Wichita area with $281.43 million in assets, according to the latest WBJ data.