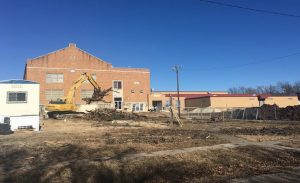 Superintendent Jeff Kohlman is already pleased with the progress being made.

“I think we’re very pleased about where we are at in the process right now and how smooth it has gone,” Kohlman said. “I think we all know there’s going to be a hiccup here and there and — how do we deal with keeping things on track as far as schedule and keeping kids safe and those types of things? So far it’s been smooth.”

The Law Company of Wichita — which submitted the low bid for the CCJSHS project — has been preparing the groundwork for the new additions to the high school. Kohlman said cold weather has slowed down the process to pour the foundation, but crews have been working inside of the high school to create temporary classroom space.

“They started with the groundwork for the new additions and getting that ready for foundation and concrete work,” Kohlman said. “Then they moved inside to a room we call the conference room that has concrete tiers in it. They removed all those tiers so they can begin renovating it in a rough draft and we can use it as a holding and temporary classroom so they can renovate other classrooms.”

Classroom renovations have required a clear timeline and lots of communication between contractors, teachers and building administrators. Kohlman said he, along with architects Mike Schmidt and Warren Ediger, have been meeting with contractors for both buildings every other week in order to make sure those lines of communication remain open. Each contractor has been working on “three-week plans” so they can anticipate the next move.

“They’ve been very good about giving us a three-week plan about what’s going to happen,” Kohlman said.

Kohlman said that has helped him to ensure the school district isn’t slowing down the renovation process in any way.

The planning also helps determine which classes will be moved next as the improvements are made.

Work at the elementary school is also going well, Kohlman said. The old gymnasium has been gutted and will soon house new classrooms. Other classes in what is called “the stage” have been cleared out, with classes moving temporarily to other locations.

Topeka-based contractors Murray & Sons have worked with elementary and preschool teachers to make the process an educational experience for the children.

“The grade school kids are really fascinated with what’s going on,” Kohlman said. “The preschool teacher talked to the superintendent of the company and he walked them through what they’d done in the gym so far and was kind of explaining that it was going to be for classrooms — that it wasn’t going to be a gym anymore. They’re working up above (the stage area) right now and it’s quite noisy. Those rooms haven’t been being used anyway, so we decided to clear that out and give them the whole space.”

Kohlman said despite the work going on, contractors have been working around the district’s schedule to help avoid major disruptions during school days.

“So far we’ve had pretty good luck with working with the construction companies to accomplish that,” Kohlman said. “When they were tearing out the concrete in the conference room (at the high school), they did that over Christmas break because it was very loud with the jack-hammering and very dusty. That’s kind of what the plan is when we move a classroom out so that we can renovate the next room.”

Students at both schools have been excited and interested by the renovation process.

“They’re interested in what’s next and how the process is working,” he said. “It’s a ‘Is our class moving first?’ type of thing. I think there’s an excitement, yet they also understand there will be some noise and some disruption, like ‘oh yeah, I don’t meet in this class today, I have to go to the library.’”

Kohlman said he’s looking forward to seeing how work continues to progress at both buildings, and hopes to have some classrooms finished by the end of Spring Break.

“They’re farther along than I thought they’d be at this point right now,” Kohlman said. “We’re pretty happy at this point, because you can actually see the progress now.”