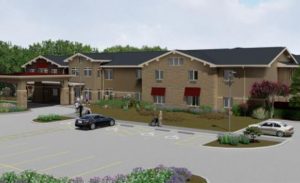 The company has five senior living campuses in various stages of development across the country.

Construction on an assisted living and memory care community in Mansfield, Texas, will start in the coming weeks and is expected to be open in the fourth quarter of 2018, a company official tells the Wichita Business Journal.

Legend spokeswoman Terry Maus says four other locations will open at different points during the first and second quarters of next year. Those include sites in Gainsville, Fla.; McKinney, Texas; Broomfield, Colo.; and Allentown, Penn.

Though out of state, Legend is working with Wichita companies The Law Co. Inc., LK Architecture and WDM Architects on the projects.

The new campuses are part of an ongoing expansion for Legend, which owns and operates 36 senior living residences in Kansas, Colorado, Florida, Oklahoma, Texas and now Pennsylvania. The company employs about 1,900 people.

In Pennsylvania, venues that are licensed for personal care offer the same level of services and care that assisted living residences do in other states.

Steven Vick and Pete Russell developed the properties, which are in Lititz and Lancaster. Russell is a partner is other Legend communities and has developed many of the company’s Florida properties. Vick co-founded Sterling House Corp with Legend Founder Tim Buchanan in the early 1990s.

The Allentown project is an extension of that partnership.