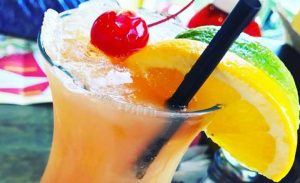 Just when it looks like summer is ending this September, a new restaurant group will bring it back in the form of an island-themed chain of restaurants called Hurricane Grill & Wings.

The restaurant operations company has a 12-site development agreement in Kansas to bring three Hurricane concepts to the area.

The first, Hurricane Sports Grill, will open at Occidental Management’s new Tyler Pointe development at the southeast corner of 13th and Tyler.

The almost 4,000-square-foot restaurant, which will have an almost 1,000-square-foot patio, will be on the corner of the L-shaped 28,000-square-foot building where Bagel Haus, Vietnam Nom and Great Clips also are going to locate.
“Tyler Pointe has extremely strong demographics,” Kinzle says. “The traffic counts are some of the highest in Wichita.”

He says he likes the density of houses there, and he says, “The income demographics are fairly strong in that area.”

It also helps that QuikTrip is relocating its store at 13th and Maize Road to Tyler Pointe.

Kinzle says the Hurricane atmosphere is bright and vibrant with island-inspired decor and music.

“The whole shebang,” he says. “It’s just going to be a very lively atmosphere.”

The covered patio will have a two-way fireplace with lounge chairs around it for what Kinzle calls a cozy relaxation area. There’s an inside bar that will open to the patio.

Hurricane Grill & Wings is a Florida-based chain with about 85 restaurants nationally and others internationally as well.

The Hurricane Sports Grill concept is a full-service restaurant that features lots of TVs for sports watching.

Hurricane Grill & Wings also is a full-service concept, while Hurricane BTW, which stands for burgers, tacos and wings, is a fast-casual concept that is smaller and has counter service instead of table service.

“Our plan is to do the Hurricane BTWs in some of the smaller communities,” Kinzle says. That potentially could be somewhere like Newton or Derby.

Kinzle says the primary focus for the full-service restaurants will be Wichita, Overland Park and Kansas City.

“Those are our core areas.”

Crave Management, which has eight investors, has the franchise license for each of the dozen sites. That same group of investors is opening the first Hurricane here under the name Crave Grill Tyler. Potentially another mix of investors, including some of the same ones as the first site, will invest in the other 11 restaurants.

“We’ll probably do two in Wichita,” Kinzle says. That likely will include one on the east side next.

The Hurricane concepts feature more than 35 kinds of wing sauces, such as a habanero-coconut- lime concoction called Coco Loco and a Buffalo sauce with horseradish called Fire and Ice.

“We will have a lot of specialty rum-based drinks that are signature to the restaurant,” Kinzle says. Also, he says, “We will have 20 taps that will have a wide variety of local craft beers.”

Kinzle also is president of OnPoint Property Group, a development company and general commercial brokerage that is expanding into residential as well.

OnPoint was fulfilling a development agreement a few years ago for an out-of-state Freddy’s Frozen Custard & Steakburgers franchisee when Kinzle says he and some partners got a taste, so to speak, for the restaurant business.

In addition to liking the chain’s consistency and food quality, Kinzle says, “We really liked the fact that it’s an island-inspired restaurant.”

Law Company is the contractor, 3ten Studio is the architect, and CrossFirst Bank is doing the financing.

Kinzle says Crave Management is interested in having multiple restaurant brands within the company. It also could open Hurricane franchises in other states. That’s a ways off, though, he says.

“Right now our focus is Kansas.”