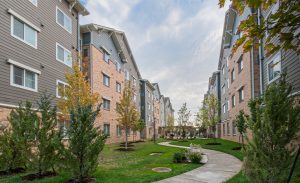 A group of Wichita investors have plans to develop about a dozen franchises of WaterWalk Hotel Apartments.

The first of those will be in Las Colinas, Texas, with construction starting soon. Las Colinas is a Dallas suburb.

Allan Dunne, owner and CEO of Dunne Investments and Dunne Property Co. in Wichita, is leading the franchise group. The Law Co. is the general contractor. LK Architecture is the architect. Both companies are Wichita-based.

Dunne says the location was chosen because of the thriving business sector in the Dallas area. He says he has been working on securing the Las Colinas site for about a year.

He anticipates the facility being operational by Memorial Day 2018. The property will have 153 units across two buildings, one with 78 and the other with 75.

Dunne says this is about a $20 million project with construction, development and land acquisition costs factored in.
The Jack DeBoer founded WaterWalk Hotel Apartments concept combines apartment living and an extended-stay hotel into one facility.

It was that hybrid model that Dunne was drawn to.

“It limits the risk of the hotel side by adding the apartment’s side,” Dunne says. “It’s sort of a flywheel built into the project.”

Every unit has a full kitchen and a washer and dryer. The Las Colinas site will have one, two or three- bedroom floor plans.

DeBoer detailed in January 2015 an aggressive expansion plan for his fifth hotel and extended-stay brand. Since then, agreements with more than 20 franchise groups have been secured for properties across the country, with some committing to multiple facilities.

A 132-unit complex at 411 W. Maple in Wichita is the model by which the WaterWalk Hotel Apartments brand is being expanded nationwide.