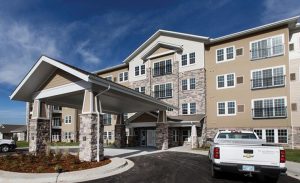 Construction on the 125,000-square foot building is wrapping up, and final inspections are being conducted on the $15 million Oxford Villa near 29th Street North and Maize Road.

The first residents are expected to move in Dec. 1. A grand opening is planned for Jan. 28.

Wichita-based Oxford is expanding its service line to complement its assisted living and memory care residences.
“We’re drawing a different audience,” says Teressa Hatfield, Oxford Villa director. “That just puts another opportunity to serve our community and give seniors choice.”

Hatfield says 20 of the units have been pre-leased so far.

Oxford Villa has 112 units, including studios and one- and two-bedroom apartments. Covered parking and parking garages also are included.

Oxford will employ seven full-time employees at the property, which is geared toward seniors who are still active but don’t want home maintenance.

The Law Co. is the general contractor. LK Architecture is the project architect.

The opening Oxford Villa comes on the heels of the Nov. 17 opening of a 75-unit assisted living and memory care senior living campus in McKinney, Texas.