Stepstone at Bluffview Place: ‘A Soft Place to Land’ 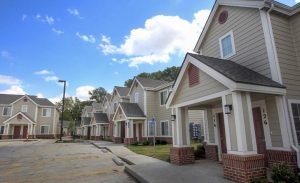 StepStone Inc. will open a transitional housing complex for survivors of domestic violence in south Wichita. The 28 units of StepStone at Bluffview Place are in three buildings northeast of Harry and Hillside, protected by gates, walls and controlled access.

The quilt is so old now that Dung Kimble has to search her memory for when it was stitched together. The blocks were drawn by children in families fleeing domestic violence.

They shared certain themes: Faith. Hope. Love. A longing for a home where they felt safe.

Those dreams were merely a vision a few years ago. On Wednesday, they become a reality.

StepStone Inc. will open a transitional housing complex for survivors of domestic violence in south Wichita. The 28 units of StepStone at Bluffview Place are in three buildings northeast of Harry and Hillside, protected by gates, walls and controlled access.

“Little did we know” how prophetic the quilt would prove to be, said Kimble, program director for StepStone, which provides transitional housing and support services for families affected by domestic violence.

Bluffview Place is a $5 million project in the Hilltop neighborhood built in partnership with Mennonite Housing. It represents a new approach in offering assistance to survivors of domestic violence.

When construction began last fall, StepStone had 14 single-family homes throughout Wichita for use by survivors and their children. But StepStone is selling some of those houses and buying duplexes closer to Bluffview Place so tenants can more easily access assistance and services available at the complex.

StepStone adopted a multi-unit complex concept for survivors because experience has shown families do better when close to staff and others who know what life for someone who has suffered abuse is like.

The security measures are vital at Bluffview Place because lethality is increasing in domestic violence cases, Kimble has said. Victims are in greater danger of serious harm or even death than in years past.

The 28 units – a mix of one-, two-, three- and four-bedroom apartments – are separated into three buildings, which have been nicknamed Faith, Hope and Love.

The gated community has 16 external cameras to monitor for trespassers. Residents can gain entrance only through use of a key fob, and all other visitors are bused to the complex office in the central community building.

Kimble said families applying to get in have told her, “It’s just going to make us feel safer. It’s going to make our kids feel safer knowing that we’re going to be enclosing them and no one can get in unless we’re letting them in.”

With a playground inside the gated community, “their kids can go play,” said Brenda Wasinger, StepStone’s development director. “They don’t have to worry about the drug deals” or strangers approaching them from off the street.

StepStone officials hope to move the first families into the complex in a couple of weeks and have 12 units in use by the end of the year.

The project was financed through a combination of tax credits from the state agency Kansas Housing Resources Corp. and financing from Midwest Housing Equity Group, Horizon Bank and FHL Bank of Topeka, officials said.

Seven houses in Hilltop were torn down to make room for Bluffview Place. Nine lots in the lower- income neighborhood, originally built to provide housing for aircraft workers during World War II, were used in the project.
Mennonite Housing will manage the property now that the complex is completed.

Byron Adrian, president and CEO of Mennonite Housing, said the group would like to get involved in more transitional housing projects. The project was plagued by uncooperative weather, but Adrian said they were able to keep it on schedule.

More than 30 police officers and two police captains were among those who helped move tables, chairs, cabinets and mattresses into the apartments last week.

“For me, it’s about giving back to the community and helping others,” Wichita police Capt. Dan East said. “We may not know who we’re helping or how we’re helping them, but for that family to have a safe place in a difficult time, that can make all the difference.”

One of the blocks in the quilt hanging on a wall in the complex’s clubhouse shows a parachute coming down next to a building teeming with people. When Kimble asked the boy who drew it to explain what the drawing meant, he told her StepStone had given his family “a soft place to land.”

Kimble said she was so moved she wept.