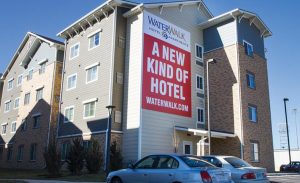 A 132-unit complex at 411 W. Maple is the model by which the WaterWalk Hotel Apartments brand is being expanded nationwide.

A year-long construction project kicks off next week to build a 146-unit building in Denver, a project announced in January.

The Law Co. is the general contractor. LK Architecture is the architect. Rose Hill Bank is providing the financing.

The WaterWalk Hotel Apartments concept combines apartment living and an extended-stay hotel into one facility.

Building in Denver is part of a larger expansion for the Jack DeBoer-founded business. Redfern says WaterWalk Hotel has secured franchise agreements with 19 different groups in the 16 months since DeBoer announced his intent to take the concept nationwide. The reception has been very positive,” Refern says.

Some markets will have multiple facilities. A franchisee plans to open another property in the Denver area, for example. Redfern says construction will start on nine more WaterWalk Hotel Apartments projects nationwide this year.

A 132-unit complex at 411 W. Maple is the model by which the WaterWalk Hotel Apartments brand is being expanded nationwide.