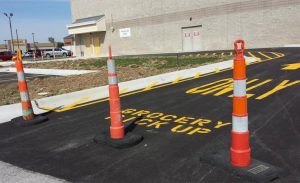 UPDATED – There’s a new drive-through lane coming to the Dillons at 21st and Maize Road – and some of the chain’s other Wichita stores most likely – but it’s not a standard pharmacy lane.

There’s a sign painted in a future drive-through lane that says, “Grocery pick up.” It’s for a service called ClickList that Dillons and its parent company, Kroger, have for customers to make grocery orders online for curbside pickup at their stores.

“I can tell you ClickList will be coming soon to a Dillons near you,” says spokeswoman Sheila Lowrie. “It just makes sense, and we’re very excited to be able to introduce this at Dillons, but I’m just not in a position to give you details.”

Kroger has already introduced the concept in several of its divisions nationally. “Our customers are absolutely in love,” Lowrie says.

“Parents are simply raving about ClickList.”

According to a ClickList description at Kroger.com, there are more than 40,000 items that customers can shop for online. That includes produce and meat but it looks like pharmacy orders will still be at a separate lane.

After confirming an order, a customer then selects a time and date to pick up his groceries.

According to Kroger.com, ClickList orders have to be paid for with a credit or debit card. Cash, checks, gift cards and government benefits are not accepted in the drive-through.

In other markets, there’s a $4.95 charge for the service. It’s not clear if that will be the price in Wichita.

When the Dillons at 21st and Maize Road first opened in 1996, Lowrie says customers could purchase deli meals at a drive-through window. At least one reader says she remembers being able to get milk at the window, too.

Regardless, ClickList will be a significantly expanded option.

Lowrie says she won’t be able to share details, including how many Dillons stores may have the ClickList service, for about a month.

When she does, though, Lowrie says the news will have an impact. “Honestly, it will be game changing for the way our customers shop for groceries in Wichita.”