Dillons Marketplace at 21st and Maize Road Undergoes Another Renovation 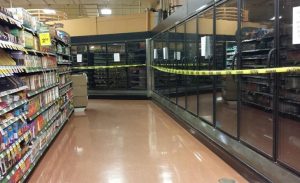 The Dillons Marketplace at 21st and Maize Road is undergoing another expansion.

Last year, the company did renovations to make room for a new apparel department.

This latest multimillion-dollar investment is for a new look in what Lowrie calls the fresh area, which includes produce, floral, the deli and bakery departments.

Dillons is expanding and repositioning its produce and floral areas and redesigning its Starbucks space and creating a new dining area.

Lowrie says one of the most significant changes will be a redesign and shifting of the check-out stands and customer service area at the east entrance to the store, which will allow for more room entering and exiting the store.

As a former customer of that Dillons, Lowrie says she noticed a need for the changes.

“It always seemed very cumbersome to exit the store with a full cart of groceries,” she says of navigating other things going on in that area.

By shifting the customer service and check stands, Dillons will have room for an additional exit in the east entrance area.

There also will be designated in and out doors, “which will make that space less congested,” Lowrie says.

The store also is expanding its pharmacy and adding a second drive through lane. Lowrie says Dillons tries to look at renovating its stores about every seven years.

This is the only Wichita-area Dillons undergoing major renovations right now. Lowrie says it’s to bring the store in line with other Dillons Marketplaces.

“The changes that you’ll see at this store will really mirror how a Marketplace is supposed to look.”

Lowrie says renovations should be completed later this summer, and she says she’s sorry customers have to go through them again.

“We do want to thank them in advance for their patience and understanding,”