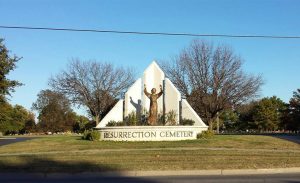 It’s perhaps a little easier to talk about residential and commercial expansions, but the fact is, Resurrection Cemetery needs to expand.

“We’re preparing for what we believe … will be the future of the cemetery,” says Jim Sheldon, director of cemeteries for the Catholic Diocese of Wichita.

“We’re hitting the baby boomer generation,” he says. “There’s 35,000 people a day turning 65 in the United States.”
The cemetery, which is on Maize Road between 13th and 21st, is 40 acres. Ten acres are currently developed, and the expansion is to develop another seven acres.

The expansion includes a new mausoleum.

“The mausoleum will be a garden mausoleum,” Sheldon says.

That means it’s an open-air mausoleum that won’t be heated or cooled.

“In addition to the crypts, we’ll have about 200 spaces for cremated remains,” Sheldon says. “We’re also expanding the grave area,” he says.

Resurrection Cemetery’s tombstones currently all fit flat in the grass.

“There’s been a lot of requests for areas that will have upright tombstones,” Sheldon says. “The expansion will accommodate more, but initially we’re going to mark off about 1,000 graves.”

Though Resurrection is a Catholic cemetery, Sheldon says, “We have buried and will continue to bury non-Catholics.”
Sheldon doesn’t expect to have to expand beyond the extra seven acres any time soon.

“I’m estimating it will take us 15-plus years before we’ll have to expand again, and maybe even longer than that.”