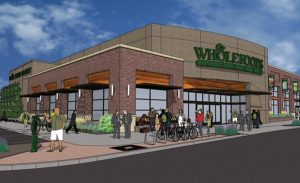 The second phase of the Waterfront Plaza development is starting this week with the construction of a $1.2 million multi-tenant building.

The Law Co. Inc. has pulled a commercial building permit for work at 1423 N. Webb Road. The permit is for the shell of the building. Tenant finishes will be done later.

Dennis Kerschen, president of the Law Co., tells me the new building will be constructed on the north end of an existing structure in that development.

LawKingdon Architecture is the architect for the project.

Waterfront Plaza is an extension of the original Waterfront development across Webb Road, near 13th Street North. It’s where Whole Foods Market will open on Sept 3.

Already, the addition of Whole Foods has helped spur additional interest in the Waterfront Plaza.

In the Bag Cleaners announced last month that it had signed a lease for 1,342 square feet in Waterfront Plaza.

Equity Bank also is building a branch in the Waterfront Plaza, though that site is separate from the strip center that is connected to the Whole Foods store.

Other tenants are in the works, but haven’t yet been announced publicly.