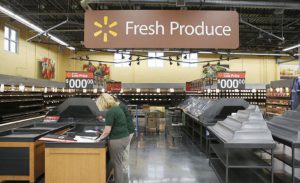 “We’re just looking forward to being able to serve this community and the outlying community,” said store manager Steve Marten.

The store includes a grocery, a pharmacy, greeting cards, health and beauty products, a pet section and a section of hardware. The store also has seven self-checkouts, which is more than other area Neighborhood stores, Marten said.

The 40,600-square-foot store is also slightly bigger than other Neighborhood stores in Wichita, Marten said.

Wal-Mart announced the store’s construction in fall 2011. It’s the second Wal-Mart in Derby. The other is a Supercenter at 2020 N. Nelson Drive.

The new store will stock 92 percent of the grocery items that are available at a Supercenter, Marten said.

The advantage of Neighborhood stores over Supercenters is the size, Marten said.

“It’s very good to get in and out of quickly for a shopper that needs to run in and get hamburger for supper,” he said.

“They can get in and out much faster than bigger stores… I think it’s going to be a great convenience for customers.”

Marten has managed four other Wal-Mart stores in Arkansas City, Winfield, Atchison and Wichita during his 30 years with the company. He said he likes this store’s format because he’ll be able to interact more with customers and employees.

Tiffany Pero, grocery merchandise supervisor, has worked for Wal-Mart for 12 years. She previously worked at a Supercenter location.

“I wanted to try something different,” she said Thursday during a quick break from labeling shelves. “I’m very excited. I’m looking forward to it. I can’t wait. This has been a very fun experience for me.”

Associates will finish stocking groceries and produce the night before the opening, Marten said.

The store has about 80 full- and part-time employees. Marten said he is still hiring for a few positions but that most have been filled.