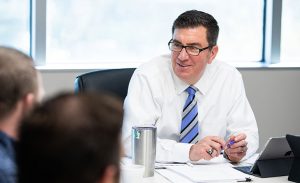 Dennis Kerschen remembers well the summers he spent in high school and college working as a laborer for The Law Co. Inc. That’s when he learned the most about the construction industry.

The 44-year-old got his start in the business through his father, Rich Kerschen, who became Law’s president and CEO in 1978. Now, Dennis Kerschen has a new role with the company: president, a title that became official this month, and he now oversees the company’s 53 employees.

I sat down with Kerschen this week to talk about that opportunity.

JH: Can you talk about the transition to taking over leadership of The Law Co.?

DK: I grew up really in the business, having my father work for The Law Co. for 95 percent of his career. I’ve always been around construction, going to job sites with him when I was younger and being able to see the business. … I had a lot of great opportunities to work with some really talented people along the way who really did their best to get me the experience I needed to grow into a role, and that’s continued. It’s certainly challenging to take over, but we’ve been transitioning a number of responsibilities over the last year, and the thing that makes it easier is the fact that we’ve got a really good management team. It’s not just me.

JH: What are some of your goals now that you are president of the company?

DK: Looking forward, we are going to provide growth opportunities for the company. We want to focus on our core areas, which are retail and hospitality, and grow our health care market. I want to find opportunities to grow so that our employees have the chance to grow as well. We’ve got a lot of employees who are capable of a lot of great things.
JH: Can you talk about what those early summers working construction were like?

DK: The first summer, I wasn’t sure what I was getting into, and I started out in an equipment yard as a laborer and making deliveries to job sites. That was exciting because I got to meet a lot of the superintendents — a lot of our work was local. So that was a lot of fun, and then it grew to where I moved out on the job the next year and was a laborer. Starting out, you’re doing a lot of cleanup and assisting carpenters with hanging doors, hardware, those types of items, but probably the most fun before I was in college was when we built the Henry’s store, which is where Von Maur is now at Towne East. I was actually on the concrete crew and learned to tie rebar and help pour concrete. That was a lot of hard work. It was one of those jobs that was on a tight schedule. … It was a lot of hard work but really enjoyable at the end. I learned a lot that summer.

JH: What kept you coming back year after year?

DK: It’s the people who I got to work with. The thing that I always enjoyed about construction is the fact that at the end of every day, whether it was a tough day or a really good day, you could always see what you accomplished. There’s always a sense of accomplishment and the ability to see what your hard work was able to produce and to produce that as a team. You’re working together. Nobody can do it by themselves.