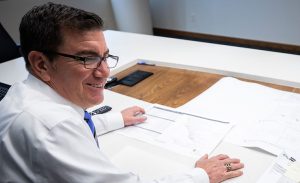 Rich Kerschen this month officially passed the responsibility for day-to-day operations of The Law Co. Inc. to his son, Dennis, who became president after election by Law’s board of directors.

Rich Kerschen, 71, will remain as CEO and chairman of the board, the latter of which he has been since 1983. He had been president of the construction company since 1978.

“It’s not the easiest thing in the world to do,” Rich Kerschen told me of handing over the reins. “You get to my age, the biggest drawback you have is your energy level. It becomes a young man’s game, particularly construction. It’s a pretty intense occupation.”

He’ll remain more in the background now. Dennis Kerschen, 44, had been transitioning into the responsibilities over the past year, per a succession plan first announced to employees a year ago.
“Dennis, he’s pretty much worked for us since he’s been a sophomore in high school, so he knows the business pretty well,” Rich Kerschen says.

Dennis Kerschen had been serving as senior vice president for business development/marketing. Before that, he had worked in the field as superintendent and assistant superintendent and then in the office as an estimator and project manager.

Also at The Law Co.’s board meeting, Doug Kimple and Marc Porter were elected as executive vice presidents.

Kimple will be responsible for construction operations of the company while Porter will continue as chief financial officer and director of administration.

In other promotions, Josh Gordon was named treasurer and Kevin Huber chief estimator.

The Law Co. has constructed some of the largest building projects in the Wichita area and the state since its founding in 1959, a news release says. It has built commercial, cultural, educational, governmental, health care, industrial, lodging, retail, multifamily housing and worship projects in 38 states and currently has jobs in about five states.