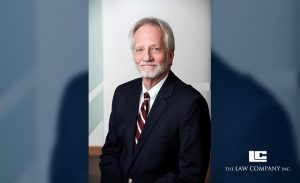 Until he was 19, Marc Porter wanted to be an electrical engineer. He had an analytical mind and enjoyed conceptual ideas.

Then he met a friend of his father’s who happened to be an electrical engineer. Porter was excited to meet someone living out his career goal. The friend wasn’t.

“He said, ‘Go into finance,’” Porter says. “He said, ‘It’s those guys on the top floor who get to make all the decisions.’”

It changed his career path, says Porter, who has served as CFO at The Law Company for 24 years.

“You’re kind of young,” Law Company President Richard Kerschen told him when he started, according to Porter’s recollection. But since then, he’s grown with the job.

Porter says that to reach a CFO position, he first had to become an accountant. Eventually, he found his way into finance, where he says “you get to do cool stuff” like strategizing and making acquisitions.

“It’s a lot like engineering, but you use numbers,” Porter says. “Engineers work with the laws of nature, and I do the same thing, but with man-made laws.”

MANY HATS
One difference, however, is that those man-made laws are subject to change.

Among Porter’s recent work was the testimony he gave to the Kansas House Judiciary Committee in favor of House Bill 2072. The bill — which died in committee — essentially would have helped general contractors avoid being charged twice for the same supplies. The situation might arise if the general contractor pays a roofer, but the roofer doesn’t pay for his shingles. The shingle supplier can hit up the general contractor to get paid.

Testimony on the bill is one of many roles Porter has stepped into as CFO. His job also includes ventures into tax law, pensions, risk management, human resources and affirmative action.

He says The Law Company and its subsidiary, Law/Kingdon Architecture, have controllers and accountants who handle a lot of the day-to-day finances, which makes his job a bit more interesting and less predictable.

“When I come in to work, I don’t have anything to do,” he says. “I deal in problems and opportunities.”

In fact, his boss, Kerschen, doesn’t hesitate when giving Porter new assignments — even if they fall outside the CFO’s current areas of expertise.

And if he’s unfamiliar with the subject matter, Porter says he’ll do his research. He says when he gets on a roll, he might work until 2 or 3 in the morning.

“If something comes up we don’t know anything about, I think of it as an opportunity to learn something new,” he says.

All that learning makes him a valuable resource for the company, says Dennis Smith, President of Law/Kingdon Architecture. Smith says his own CPA frequently consults with Porter.

MANY SKILLS
One area where Porter’s knowledge has been valuable is in risk management. It’s helped the Law Company “tread water,” as Porter puts it, even in an economy where “a new building is the last thing anyone needs.”

Among his many other skills, Porter is a talented raquetball player, Smith says, and he loves to fish. Kerschen says that in the end, Porter simply is an invaluable asset to the company.

“He’s been a godsend for the Law Company and for me, so I can focus on what we’re in business to do, which is to build buildings,” Kerschen says.