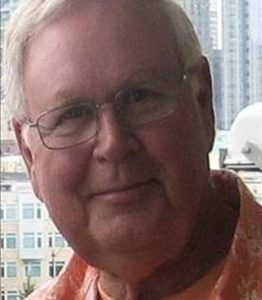 Chris was born in Twin Falls, Idaho on September 20, 1939, the 2nd of 2 children of Woodrow W. Bolton and El Wynna Davis Bolton.

After moving from Twin Falls to Dumas, Texas to Lamar, Colorado, Chris’ family move to Stillwater, Oklahoma in summer of 1946.

During his Junior Year at SHS, his friends, Benny Bunch and Sandy Smith set up a blind date with a sophomore girl, named Betty Collyar. They met at the Hamilton Football Field – south stadium during a Toy Pioneer’s football game. That became the beginning of a relationship that lasted over 58 years and a marriage of 56 years. Chris (SHS’58) and Betty (SHS ’59) loved their time at Stillwater High School and never missed one of their SHS Class Reunions.

Chris attended Oklahoma State University receiving his Civil Engineering Degree (BS in 1963 and his MS in 1964).

In June, 1964, the family moved to Wichita, Kansas, where Chris was employed by Commercial General Contractor, Law-Pollitt, Inc., later renamed The Law Company, Inc. He worked for The Law Company, Inc. for 36 years under many job titles, Estimator, Chief Estimator, Project Manager, Director of Engineering, and Senior Vice-President when he retired in December 1999. Chris’ responsibility, along with his estimating department, was to acquire the work or projects to build, by preparing the bid estimates for either competitive bids or negotiates bids. Once LC signed a contract, Chris would award some of the major subcontractors / supplier’s trades and the LC’s Field and Project Management Divisions would build the projects. During Chris’ 36 years, he and his Estimating Department acquired over 350 Projects in 39 States, totaling approximately $1.65 billion dollars.

In 1965, The Law Company, Inc. negotiated its first out-of-state shopping mall with a developer now named Simon Properties. This relationship became stronger and stronger as basically Simons Properties and Law Company grew up together in the corn fields of Nebraska, Iowa and Indiana constructing shopping malls.

Along with shopping malls, LC built Office Buildings, Corp of Engineering Projects, Hotels, some of Lear Jet and Boeing Plants and many department stores, such as Penney’s, Sears. Wards, Belk’s, Dillard’s, etc.

In the retail industry, some say Chris’ “Conceptual Estimating” ability, where he could take the “Owner’s Criteria” and develop a Contract Amount with the Owner, prior to the preparation of the architectural “For Construction Plans and Specifications” was amazing. Chris used this ability to help pioneer the concept of “DESIGN – BUILD” in the Construction Industry.

In early 2000, Chris retired and left his LC Family and established Bolton Consulting, LLC, a construction consulting firm, where he continued to provide services for The Law Company, but established a new client, SLAB, LLC, where he was an Owner’s Representative on the construction of Ritz-Carlton Properties in Sarasota, Florida from 2000 to 2005.

Chris was preceded in death by his parents; his wife Betty; his son Wayne; and a sister, Pat Bolton Jackson of Stillwater.

He is survived by his daughter, Doni Beth Bolton Helser (Fred); granddaughter Shelby and grandson Connor, all from Bella Vista, AR.
In lieu of flowers donations can be made in Chris’s name to the charity of your choice.