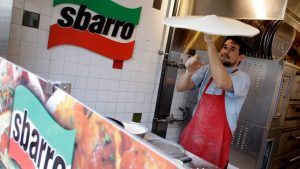 A 1980s food court darling that hasn’t been in Wichita for about a decade is returning to town.

The Sbarro news is even better than we thought, especially for pizza fans in west Wichita.

Kwik Shop and Sbarro representatives didn’t immediately return messages about the partnership, but a manager at the store at Kellogg and Oliver said the deli has been torn out and that construction on the Sbarro is nearing completion. He anticipated it would be ready by mid-March, and he said it would offer pizza by-the-slice as well as whole pies.

Construction starts Monday at 4802 E. 21st St., which is near 21st and Oliver, an employee there said. The timeline is less clear at the store at 47th South and Seneca, where construction has yet to begin.

A Topeka Kwik Shop — the one at 3706 S. W. Burlingame Road — is also about to get a Sbarro, the Topeka Capital Journal reported earlier this month. That shop will also add a Taco John’s. (The Kwik Shop at Kellogg and West streets also has a Taco John’s inside.)

The Law Company, which is handling construction on the Wichita projects, also is working on adding a Sbarro to the Kwik Shop at 1727 W. Crawford in Salina.

The Wichita Eagle
By Denise Neil