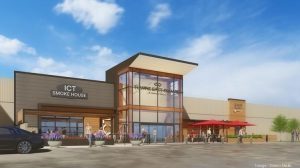 Simon said it would be the first redevelopment of the mall since 2008 and would start early next year with completion by March 2023.

“Towne East Square has proudly served the Wichita community for over 45 years and strives to continuously evolve as a best-in-class shopping, dining and experiential destination,” said Stephanie Courington, Towne East’s general manager. “We feel certain this redevelopment will enhance the center from the outside in, all to better serve our loyal customers and existing retailers.”

Timing of the renovations are being set to coincide with the 2023 opening of Scheels, a sporting goods and entertainment store that is renovating the two-floor, 220,000 square-foot Sears space as the west-central mall anchor.

Wichita’s LK Architecture is the architect for the project and The Law Company is the general contractor.

Improvements announced by Simon include:

Simon did not estimate a project cost.