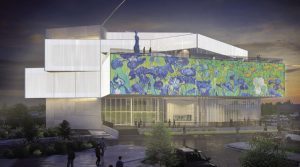 Bob and Tracey DeBruyn want to bring a taste of Paris to Manhattan.

“We were just totally blown away,” Tracey said. “We knew this was the kind of experience we wanted to bring to Kansas.”

The DeBruyns recently spoke to The Mercury in their first public comments about what they hope to bring to Manhattan with the museum experience. The DeBruyns would be on the board of a nonprofit organization that would own the museum.

They are awaiting a decision from the Kansas secretary of commerce that would pave the way for the museum. 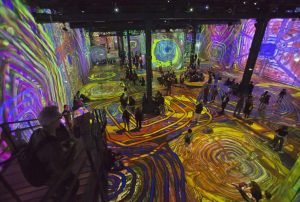 People look at the Austrian painter Friendensreich Hundertwasser’s art projection at the l’Atelier des Lumieres gallery in Paris, France, on April 24, 2018. A trip to this museum inspired Bob and Tracey DeBruyn to develop the proposed Museum of Art and Light.

“It’s like being inside a painting,” Tracey said. “It’s just kind of an incredible experience.”

The digital exhibits would project different scenes like the Sistine Chapel and others on the walls and floors to transport people into those spaces. The museum would feature digital images from artists like Picasso and Rembrandt as well as local and regional artists.

While the Paris museum served as the inspiration for the DeBruyns, this style of exhibit is gaining in popularity across the world.

Kansas City will have two immersive Van Gogh exhibits later this year with “Van Gogh Alive” from Oct. 23 to Dec. 31 at Starlight Theatre and “Immersive Van Gogh” from Dec. 1 to Feb. 6, 2022, at an as yet unnamed venue.

“If it’s raining in the film, you see puddles of water on the floor,” Bob said. “Sight, sound, motion and emotion. You got them all (in a way) that no other media except television has.”

The DeBruyns, a husband-and-wife team who operate The Master Teacher in Manhattan, approached the city government about building the museum next to the Flint Hills Discovery Center.

“It’s just an incredible experience and the uniqueness here is that other museums around the world are understanding that they need to attract this new customer, this young person who’s been on the phone and will be bored by just walking through and looking at pictures on the wall,” Tracey said.

They hope to open up more opportunities for children around the area, state and region connecting them with art in this museum.

Last week, Manhattan city commissioners approved the use of sales tax and revenue (STAR) bonds for the creation of the museum. Officials expect the Kansas secretary of commerce to decide in the next few weeks whether the project is an appropriate use of STAR bonds.

The city estimates the total project cost at $43.6 million plus the cost of the land. Half of that would be generated by state sales tax revenue and the other half would come from private donations.

Organizers want to acquire about $21 million in private donations and use $23 million in STAR Bond funds to create the three-story, 50,000 square-foot museum.