A different kind of food offering is opening where Rowdy Beaver, Willie C’s were 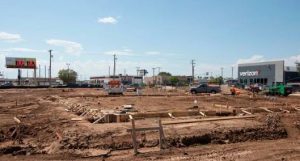 Kwik Shop is opening later this year where Rowdy Beaver and Willie C’s once were. Within the 7,500-square-foot store, Taco John’s and another yet-to-be-named restaurant are opening as well. Travis Heying The Wichita Eagle

The Kellogg and West Street property once home to Rowdy Beaver and Willie C’s before that is going to have food once again, but in a much different form.

Kwik Shop is opening at the spot late this year, and the 7,500-square-foot store will have a Taco John’s within it along with one more yet-to-be-named restaurant.

This is only one of potentially several more stores U.K.-based EG Group is working on in Kansas.

“What we’re doing is filling in where we have our current banners.”

EG Group’s first two new Kwik Shops since the purchase will be the Kellogg and West store and one in Garden City.

Prior Kwik Shops have been 3,600 square feet on average.

The extra space in the store gives an opportunity for more products, Rantanen says, though it won’t have full grocery offerings.

The store will have a beer cave, fountain drinks with 48 flavors, a coffee station with a pre-brewed thermos-filler option and fresh-brewed options, traditional roller food and hot sandwich selections among other things.

There also will be a vape shop.

She says the entire store will have a more European look with lots of glass windows.

There will be eight fuel pumps for 16 fueling positions.

In Goddard, where Kwik Shop has a 12,000-square-foot store, EG Group is replacing its in-house fast food offering with a Burger King.

In Garden City, the new Kwik Shop will be at the northeast corner of Highway 83 and Schulman Avenue. It also will have a Taco John’s.

“It’ll be pretty much exactly the same as this store,” Rantanen says.

The new Wichita Kwik Shop is expected to open in early November. Look for more details on it and other new Kwik Shops later this year.

The Wichita Eagle
By:  Carrie Rengers