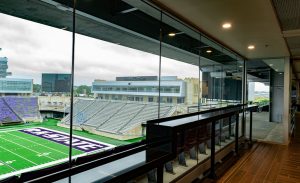 When walking out the doors of the Vanier Family Football Complex onto the north concourse, it all hits at once; the size and vastness and yet the elegance and charm overwhelms the senses.

Jeremy Niederwerder, associate athletics director for facilities, offers to take a look at the new construction updates happening in the stadium so that when going out those doors, it all hits again.

But unlike many times before, a limestone wall now surrounds part of the field; another addition to the puzzle of Bill Snyder Family Stadium.

The west side of the stadium under the press box looks nearly finished, with the personalized capstones the only stones missing. However, as one scans across the stadium, the progress is less apparent, and layers are still needed below the wall.

“Weather is construction’s biggest enemy,” Niederwerder said. “Over the last two weeks we’ve had I think just over six inches of rain or something, so that’s kind of prohibited construction a little bit, but we’re back on track.”

Despite the weather delays in recent weeks, Niederwerder said the wall project is actually ahead of schedule. The drainage and layers of cement have been laid, all that is left is the “vertical construction,” or as Niederwerder put it, “the fun stuff.”

“The rest of the work will really go fairly quick,” Niederwerder said. “Now that we have that underground work complete, we’re coming out of the ground and we’re starting to see the fun stuff instead of the stuff that’s just underground.”

The project to construct the wall around the field is just the fourth phase in the construction efforts on the stadium. Phases three and three B included large-scale improvements, consisting of a brand new Vanier Football Complex and major renovations to the north side of the stadium.

Phase five is more subtle than past phases, but interim athletics director Laird Veatch said the new additions, including the limestone wall around the field, will be impactful.

“The field level wall is something we’ve wanted to do for quite some time,” Veatch said. “It’s just a real visible statement to kind of tie back who we are on campus with who we are here at the stadium. Not only for the folks attending games in the stadium, but from a television standpoint, we think the visible nature of that will be pretty impactful.”

The wall, which is expected to be completed in May, has an estimated price tag of $3 million.

“The original schedule, we had it pushing construction out to the end of May for the field wall, and we’re looking like we’re going to beat that,” Niederwerder said. 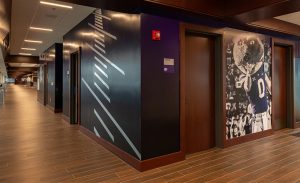 The wall is the most visible addition but not the only improvement to the stadium. As Niederwerder led out toward the rail, he pointed up to speakers and statistics boards at the south side of the stadium. The changes are not apparent on the surface; the speakers and boards look no different than they did any game day last fall.

But Veatch and Niederwerder said the improvements were needed.

“The sound, in particular, is something we’ve received a lot of feedback on from fans,” Veatch said. “We do a lot of postgame surveys, etcetera, and sound is an area we really knew we needed to upgrade.”

“Our last sound system was about 11 years old,” Niederwerder said. “The new one is going to be a little bit louder and a little bit clearer. It distributes the sound better than the old system.”

d club level areas on the east side of the stadium will also receive improvements.

The next two phases of updates will be to the east and south sides of the stadium. Veatch said K- State Athletics is still assessing what changes are needed in the future. He said soccer and baseball facilities improvements are also in the plans.

“We’re working on some plans for continued developments for soccer,” Veatch said. “And also with that space being right next to baseball, possibly taking advantage of those locations being so close together and doing some things to benefit those programs.”