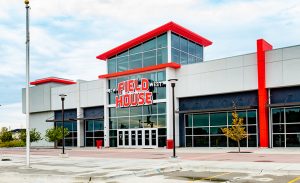 FieldhouseUSA is a league, event and tournament based indoor sports facility projected to welcome more than 1.6 million visitors annually to their new location.

GRAPEVINE – FieldhouseUSA is expanding its sports facilities with another entertainment venue set to open in January at Grapevine Mills mall.

The indoor sports facility will bring numerous youth and adult sport leagues, tournaments and athletic opportunities to the area.

Gary L. Oliver, principal and CEO of FieldhouseUSA, said the state-of-the-art facility’s construction is set to begin, and scheduled to open on Jan. 6

FIELDHOUSEUSA IS A LEAGUE, EVENT AND TOURNAMENT BASED INDOOR SPORTS FACILTIY PROJECTS TO WELCOME MORE THAN 1.6 MILLION VISITORS ANNUALLY TO THEIR NEW LOCATION

“We want to be open for winter leagues,” Oliver said from his company’s Frisco office.

FieldhouseUSA is a league, event and tournament based indoor sports facility projected to welcome more than 1.6 million visitors annually to their new location.

The 106,000-square-foot Grapevine indoor sports facility will feature nine basketball and nine volleyball courts serving guests by offering year-round league play in team sports such as basketball, volleyball and indoor soccer. The facility will go into an existing spot that once was home to a former JC Penney outlet store.

Additionally, FieldhouseUSA hosts a wide range of events and tournaments, which caters to select, club and recreational teams across the United States.

It is anticipated to generate millions of sales tax dollars annually and will have a major economic impact for the city and surrounding areas, officials said.

Simon is a global leader in retail real estate ownership, management and development. The Mills is one of Simon Property Group’s real estate platforms.

FieldhouseUSA is geared toward recreational, intermediate and competitive athletes and offers a variety of sporting activities where everyone has a place to play and create an amazing experience, Oliver said.

“FieldhouseUSA is a welcome addition to Grapevine’s renowned venues,” the CEO said. “We are pleased to bring this incredible opportunity to Grapevine and its neighboring communities. Residents will enjoy an exceptional multi-purpose indoor sports experience and all of the amenities and privileges of a state-of the-art sports facility.”

He said that he loves doing what he does – serving youths and adults, adding, “We’re part of the community raising families in a family environment. The energy we see in the youth in our facility is truly amazing. I can’t think of a better way to spend my time every day.”

The Grapevine Parks and Recreation Department has partnered with FieldhouseUSA as the sponsor program for operations of the basketball and volleyball leagues for the city and will operate through the FieldhouseUSA Grapevine location.

Leagues will begin forming in early 2017. More information will be available on Fieldhouse’s web site, Fieldhouse USA.com, regarding the grand opening event, league registrations and other offerings.

“We think it’s going to be a great partnership,” Oliver said, noting that the city is already well established in the sports arena.

The announcement follows a similar one last August that the company is expanding to Mansfield, where ground was broken for the facility in January.

Oliver said they are under construction and plan to open in November or December, adding that Mansfield is also a great location.

“We feel like Mansfield has a very athletic-based mindset,” he said. “The demographics fit what we do.”

The indoor sports facility will be located at the northeast comer of U.S. 287 and Broad. That location will be 103,000 square feet and will feature eight basketball courts, which can double for 12 volleyball courts. There will also be space used for other sports including cheerleading, indoor soccer and athlete training.