Oxford Villa Senior Apartments to be Completed by September 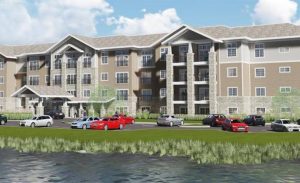 Just west of 29th and Maize Road, Oxford Senior Living is now framing its new 4-story Oxford Villa, which will have 108 apartments for active seniors.

“We are getting a lot of comments now that it’s going up,” says Coryanne Graham, director of marketing and brand.
“You think about a 4-story building in west Wichita, there’s almost none.”

This is the second phase of development at Oxford at NewMarket.

Oxford has various levels of care, from independent living to memory care.

Unlike independent living with some properties, Oxford Villa doesn’t require a substantial buy in to the whole community.

The complex, which is at 3031 N. Parkdale Circle, is like any other apartment community that requires a small deposit up front. The only difference is that it’s for seniors.

Graham says it’s “really catering to that 55 and up audience.”

“There’s actually not a comparable type of apartment housing in Wichita,” she says.

Graham says the complex has key-coded entry, internal corridors for extra security, access to a home health care office in the building and partnerships for concierge services, such as maids and grocery shoppers. She says there are upscale features as well, such as granite counters.

There are nine floor plans, which range from 452-square-foot studio apartments to two-bedroom units with 1,367 square feet. Rent ranges from $995 to $2,895 a month.

The apartments will be ready in September.