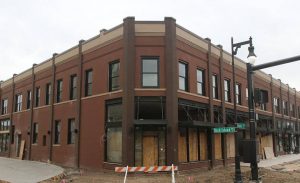 Regus, an international company that rents out flexible work space, will have 12,000 square feet, said regional vice president Jeff Bowron. The company’s offerings range from a virtual office with a mailbox to a large office suite on a multiyear contract. One of its most common customers is the one- man business.

“We get that person working out of a home office but looking to focus a little more than with the dog barking and kids yelling,” Bowron said.

Regus has 3,000 locations around the world, with about 10 in Kansas, he said.

Also opening in the Grand Hotel, Wells Fargo will put its commercial banking operation in 6,200 square feet, and State Farm agent David Kemp will put his office in 2,500 square feet.

The Smoothie King and Mumbai Rail Indian Bistro will open next door in the former Rock Island Depot in December, Stafford said.