Construction on Academy Sports Store in NE Wichita Under Way 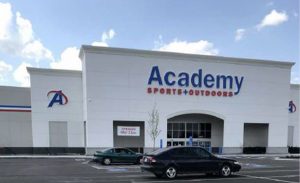 Academy Sports & Outdoors is well on its way to adding a second store in Wichita.

The roughly 72,000-square-foot store under construction south of K-96 and east of Greenwich Road. Much of the facility’s exterior already has been completed.

The store’s address is listed as 2532 N. Greenwich.

The Law Co. Inc. is the general contractor on the project. The company has pulled a commercial construction permit valued at $3.5 million.

The store is slated to open in 2015, though the Katy, Texas-based company hasn’t pinpointed a specific date.

When it opens, Academy Sports will be another marquee addition to the growing Greenwich corridor.

The Wichita Business Journal reported in January about Academy’s plans to open a second Wichita store.

The new store will be Academy’s fifth in Kansas. The others are in Olathe and Overland Park and Topeka.