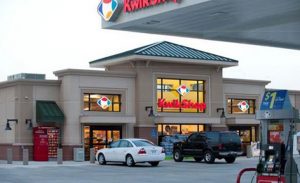 Kwik Shop is building a new store, this one near Kellogg and Oliver. Construction has started on a Kwik Shop store at 514 S. Oliver.

The Law Co. Inc. is the general contractor. Combined, it is roughly $1.9 million project.

The 5,500-square-foot Kwik Shop also will include a car wash.

The convenience store portion is more than $1.3 million, based on commercial building permits that have been pulled for the project. The car wash comes with a $264,000 price tag, and the gas-pump canopy will cost $122,000.

Dennis Kerschen, president of the Law Co., says construction is expected to be completed in December.

In February, Kwik Shop bought the land for the store at Kellogg and Oliver.

Kroger-owned Kwik Shop has more than 130 stores in Kansas, Nebraska, Iowa, Tennessee and Mississippi, according to its website.

The new store will be similar to the one Kwik Shop opened near 37th Street North and Maize Road.

Kwik Shop is moving forward with some capital expansions of its own during a time when its largest local competitor, Quik Trip, has been aggressively updating existing stores and adding new ones to the market.