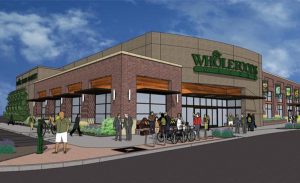 The Austin-Texas company had been avoiding the “Whole Foods” name because of an existing group of locally owned stores under the name Whole Foods Association. But those stores have since been acquired by another local company, Green Acres Market, and they will adopt the GreenAcres name.

GreenAcres Market and Whole Foods Market made a joint announcement Tuesday about the naming agreement.

Barb Hoffman, CEO of GreenAcres, said in a news release that the decision to rename the stores was difficult, because she has respect for the Whole Foods Association name created by the previous owner, Rene Shelton. However, she said she thinks a unified GreenAcres brand makes sense for the stores.

GreenAcres will rebrand three Whole Foods Association locations, at Central and Woodlawn, 21st and Amidon and 21st and Maize, by late summer.

Whole Foods Market will open around the same time at the northwest corner of 13th and Webb Road.