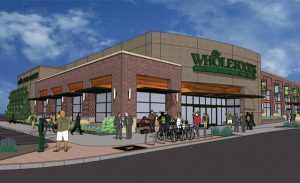 Engineered Structures Inc.’s permit for tenant finishes for the northeast Wichita store has a value of about $3.8 million.

The permit follows one issued in September to Law Co. Inc., valued at $3.5 million, to build the shell of the grocery and adjoining stores to the north.

Whole Foods’ store, to be called Bread & Circus, is the anchor tenant at Waterfront Plaza at the northwest corner of 13th and Webb.

“You’re starting to see what kind of quality the center’s going to be,” says Stephen Clark II, vice president of Clark Investment Group, which is a partner in The Waterfront with Johnny Stevens.

“It worked out better than we imagined,” he says. Architectural firm Law Kingdon designed Waterfront Plaza.
Don Piros of Landmark Commercial Real Estate is marketing the retail space being built alongside the grocery.
Clark says announcements on additional tenants next to Whole Foods could come later this month or early next month.

One tenant already is slated for the center, SpaRenity Nails & Organics, which intends to open about the same time as Bread & Circus, says owner Kevin Tuan.

“I’m very lucky” to find such a good location, he says.

He’s been in the business for more than 15 years, but SpaRenity is a new, upscale business he’s started. He recently launched a small concept version at 37th and Woodlawn in advance of opening the Waterfront location, where he says he’ll lease about 2,400 square feet.