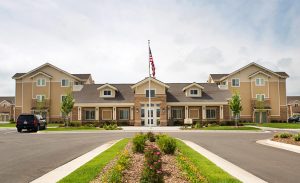 WICHITA — Developer Paul Jackson is preparing to build the next phase of Andover MarketPlace, and it’s a sizable one.

It’s the SunStone Apartment Homes at 711 E. Cloud, which is south of Kellogg a half mile east of Andover Road.

That means there won’t be an affordable-housing component to the apartments.

Jackson initially purchased 80 acres east of Kellogg and Andover Road and then bought another 70.
“We’ve owned that land since around 2007 and have slowly developed it … in the most quality fashion that fits the community,” he says. “You know, that’s a big project for Andover.”

The MarketPlace is where there’s a Dillons Marketplace, the Andover YMCA and an elementary school, all of which have since purchased their land from him.

There’s also a strip center with several retail businesses in it along with an Arby’s restaurant.

Jackson says the highway exposure and convenience will be great for the apartments.

“Most importantly, we think it’s a very good use for the site that supports the other things around it.”

Jackson says he’ll break ground this spring. A clubhouse and the first apartment buildings will be ready this fall, and the rest of construction should be through by spring 2014.

There will be floor plans with one, two and three bedrooms. Amenities include garages, storage units, a pool and a recreation area.

The Law Co. is the general contractor and Krehbiel Associates is the architect.

He says research shows demand is strong in Wichita as well.

Since 2008, lending has tightened considerably, which Jackson says makes it difficult for a lot of first- time home buyers to get financing.

“It’s not as easy to do that anymore.”

Jackson can’t specifically say what will follow the apartments.

“We’ll continue to develop on our original plan.”

That includes pad sites along Kellogg with retail and some office uses.

The land between SunStone and Dillons will have junior box retailers.

Nothing is firmly set yet, though, Jackson says.

“In my business you just have to be flexible.”

By Carrie Rogers  The Wichita Eagle